Costa has a fish taverna on the beach at Astros. The restaurant is in a small square non descript building that faces the road that runs parallel to the beach. As you walk from my father’s apartments it is the last and best restaurant of six eateries. There is one other fish tavern, two restaurants and two cafés. A beach shop and ice cream parlour are interspersed on the landed side of the road.

Costa has a simple gazebo on a platform on the beach.   Two stone steps take you down to the beach, where rows of thatch umbrellas lie dotted with two loungers neatly hugging each pole under the dark spot of shade. The beach is not sand, but not quite pebbles.   The clear blue sea runs into the bay, with the harbour on the left. The gazebo has a lighter blue frame with a woven bamboo lattice forming a flat roof. When the sun is directly overhead at noon brilliant shafts of light fall on the tables, bright enough to notice but not big enough to add any heat.

My father would go for a walk every morning in Astros. He would leave in the cool of the morning that no holiday maker would brave. As he walked past Costa’s, which only opened mid morning to prepare for lunch, he would drape his towel around the chair of the square table at the end of the gazebo nearest the beach. A large pine tree added natural shade just after this, with a light resin fragrance the mixed with the shimmering light of summer. The tree also house cicadas that added a siesta inducing rhythm to the promised lunch.

If he had guests or other family at Astros he would move as many tables as necessary to accommodate every one and leave his towel as a sign of ownership for Costa. After his walk, a bit of light therapy on the beach, and the obligatory bath in the water, my father would stroll up happily to his seat under the gazebo. Costa or his only waiter would arrive, exchange niceties and suggest a meal for the day. If my cousin Panayiotis was down from Athens he would inspect the fresh fish in the fridges across the road and make arrangements as to how they should be cooked. Meanwhile, bread and cheese and salads and wine would be ordered. A clean blue  piece of Greek restaurant paper lay clipped diagonally on each table.  Soon the blue space was filled with thick white plates holding bright red tomatoes with cool green cucumbers under a thick slab of feta; olive oil drizzled over and dried oregano from the mountains sprinkled over like green jewels. Light brown batter fried baby marrows, slabs of fired cheese, and plates of fresh French fries. Dips of Tsadziki and humus would invite thick slices of bread from the basket. He often served a light rose with a hint of resin, pleasant Retsina to assist the cicadas in the induction of the obligatory siesta. Dessert was usually fruit, sometimes an Italian ice cream or cream Brule.

Slowly the interaction at the table would slow down and everyone would move off to rest behind shuttered doors.

I went there the year my father died. We ate the same food at the same table and had a good rest afterwards. When I left, Costa gave me a €5 note, asking me to light a candle in his memory. Costa too, will miss him. 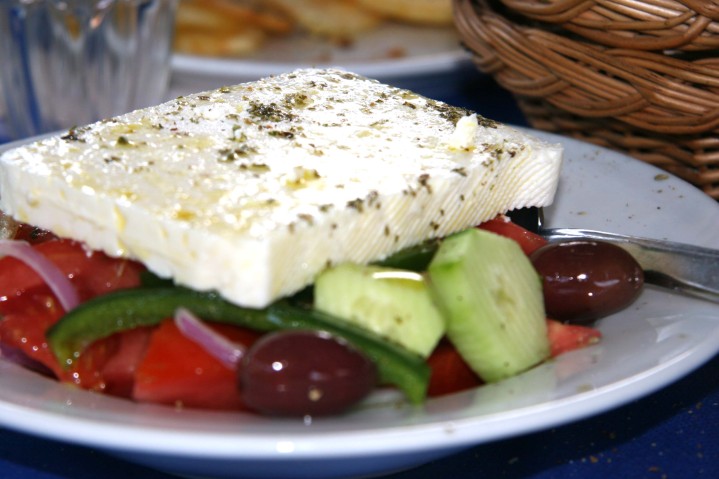