The village is poor beyond the comprehension of someone from places they call developed. The village children wore western clothes, shorts and shirts, dirty and faded. The woman wore bright blankets, barefoot with dream catcher ear rings. The higher the status of the woman, the more fancy was the dream catcher hanging from her ear. 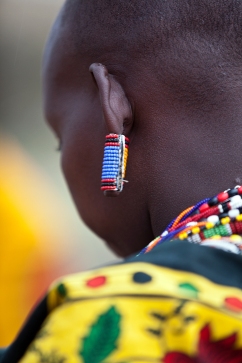 Measures of poverty are unseen on a single visit: Health, or ill health, can be measured by poor dentition, but the infant mortality rate is unknown. AIDS has marked Kenya as well, with most Safari vehicles brandishing an AIDS education bumper sticker proudly. The skin of the villagers is dry, scarred, and some of the children had open sores.

The woman collect water in 25 litre plastic barrels and carry these from the water point. This might be a hand pump or a flowing river in season. There is no obvious filtration system, and I did not smell any chlorine or bleach. They boiled the water for tea, but this was winter. What about in summer when you wanted a cold draft of clear water to slake your thirst? There were no fridges, stoves or any other modern electrical appliance we might think we could not live without.

The Masai moved in to Southern Kenya 300 years ago. They established themselves as successful cattle herders and warriors. Slowly their life was infiltrated by a cancer that included colonisation and then globalisation. They still live in houses that resemble their original dwellings. They still barricade their villages with thorns. They still occasionally kill lions with their bare hands and spears. But even if their children wanted to become great warriors as in the past, it will not be possible. Things have changed so much. If the same children want to dream of becoming anything else it must be to be a city man, dressed in smart clothes with a car and mobile phone. What measures have they left of success, when the old system is dying and the new system is corrupt?

As the young men came home with the cattle, they offered to show us how they drain blood for their blood milk mix. The placed a belt around the cows neck as a tourniquet to bulge the external jugular vein.  One of the men stood back with a bow and arrow and shot from point blank. The arrow bounced off the thick hide. He repeated the shot, over and over, until in the darkness we abandoned the village, sick off the pain in the cow’s eyes and the ineffectual blunt arrow.