There are two special moments in darkroom work: the first is when you unroll the wet film from the black developing tank and see the negatives, and the second is when your first full size print comes to life in the developing tray and you see the image in the red light. 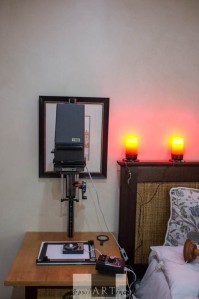 It was a hot and humid day in Durban and I loaded the film into the reels and developing tank in a small windowless and airless room under the steps at home. Then I set about the chemistry of mixing the DF11 Ilford film developer, a homemade stop with vinegar and the Ilford fixer. The temperature of the developer is critical and fortunately Ivor Ginsberg had sent me a thermometer that fitted in the irrigation spout of the developing tank.

Using the Durst “Made in Germany” mechanical timer and Mike as a time keeper, I poured the developer into the tank like a celebratory glass of champagne and agitated the mix every minute until I poured that out and poured in the stop to cease the developing process. Then a few minutes in the fix, and after the first wash, I opened the tank lid and peeped at the negatives. My heart sank initially as I had exposed Mike’s film by opening the camera back as we had forgotten how to rewind the film in his “automatic” Minolta 500i. The OM1 was much easier with a manual rewind lever. But the negatives looked alight.

I used dishwasher rinse as a wetting agent, then dried the film with a chamois, as I only had an old squeegee that would scratch the film because the rubber had perished. Ivor had sent original film hanging clips so we left them to dry in the shower and had lunch.

After lunch I set up the spare room as darkroom.  I placed the Meopta enlarger and timer and the Patterson enlarging “computer” ( just a simple exposure meter) on a table. After a few test prints, as I had no idea of what time to use, we found some images appearing. When I changed the enlarger bulb to a full 150 Watt light things really started happening. Ivor had sent some old (from the fifties or sixties) Agfa Bronica paper. This was not a resin paper and dried badly without a proper drier or press. Then we started using the Ilford Mutilgrade resin paper and my first picture was born.

The equipment was working well enough to plan a darkroom party at Costa Calla. 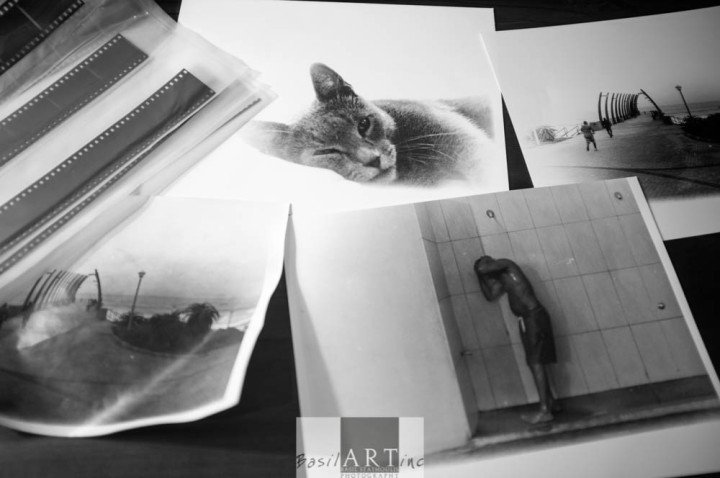 My best school friend and I put the finishing touches to the taverna. We struggled to bolt heavy steel brackets into the walls to hold the pelmet covering the massive sliding doors that opened onto an equal size veranda and then the garden. We screwed a three split pole planks onto the bracket to hide the industrial rails holding the doors. The pelmets matched the sloping ceiling under the gum pole rafters. The tiles that were laid down on the floor impressed me most, as these were the same as the ones used in the local church. Pity now that the church has recently covered the red unglazed ceramic with a carpet.

My father was very proud of his taverna. He built it in the back garden in front of the borehole reservoir, complete with a small kitchen, storeroom and fireplace. There was a tree growing out each side of the veranda; a willow on the south side and an apricot tree on the north side. Both softened the white Spanish plaster even more and afforded shade for those afternoon lunches that invariably became poker games in the evening.

Taki’s Taverna, as it was christened, replaced an old red wood hut we used to call the kalajuka. This is an Anatolian word that is also used by the Inuit, that no doubt my grandparents and everyone who arrived from the village called an outdoor informal hut. When we used words like this at Greek school, the prim and proper Greek teachers would laugh at us, as if we were real hicks. The taverna was blessed by the local priest when it was completed and a party was held with sheep on the spit, dancing, drinking and card playing. All the guests brought a gift for the taverna; Aunty Penny brought a ceramic name plate, in Greek, which is still proudly displayed on the front wall.

I think Uncle Taki brought a guitar and left it hanging on the wall. When he was there he serenaded everyone and made us laugh. He was a joke a minute, when not seriously serenading while strumming. Someone else left a picture of a nameless villager from Greece. It looked the splitting image of my father’s best friend in Greece, Old Man Vlachos. It hangs proudly in the centre of the main wall. All sorts of Greek trinkets, good luck charms and tourist mementos littered the simple plaster mantelpiece.

My father had special small wooden tables made that matched the ones in Greek taverns. He sourced Scandinavian chairs with rattan bases to match the village chairs. His choice was much smarter than the village chairs but they lasted and weathered to look the part.

My favourite areas of the taverna were on the north side. Here was a huge outdoor pizza oven that could fit two whole sheep for roasting, and also the kitchen. We never ended up using the kitchen to offload my mother’s kitchen in the house. That’s mainly because it was the perfect size for a darkroom. The small windows were easily blacked out and it had power and a basin. I spent many happy hours in there developing films and waiting for images to appear magically on the white papers in the chemical washes.