We landed on a stone beach in moderate surf amongst a group of Elephant seals.

Grey-black clouds billowed over the mountains, attempting to cover the gun blue glacier face that divided the black cliff at the other end of the bay..

A loud crack and puff of pure white snow announced the birthing of the glacier.

Simon Boyes, the ornithologist on board, led us through the giant Elephant Seals that were jousting to secure their harem.  They can weight up to 3 tons and raise their necks by extending their backs to face the competition. They are a lot less graceful and if you stand 5 meters away (the rule of wildlife viewing in the Antarctic and Sub-Antarctic region) then invariably some penguins walk up behind you and start pecking at any loose straps. There are 400 000 Elephant Seals on South Georgia, making up 75% of the global population. The scientific name is Mirounga leonina

The Origin of Scientific Names

My fascination with the origin of names was worthwhile in this instance. Many have Greek derivation, as in the leonina for lion-like. But the Genus Mirounga is derived from the old Aboriginal word for these animals, whose range stretches to the Sub-Antarctic islands of New Zealand and Australia.

Simon led us to a breeding colony of King Penguins on the beach. He drew a line with his foot in the pebble beach to keep us from entering the thickest part of the colony. This line did nothing to prevent the penguins from coming to investigate us. We set up to photograph in a jaw dropping position: penguins squawking; elephant seals jousting; penguins incubating eggs while last years hatchlings were bigger than their parents and covered in brown down; wieners barking and skuas flying and landing like scavengers at war.

Snow Does Not Stop photography

Then it started snowing. First lightly then much harder, then the wind picked up to break the muffled quiet of the snow. Many of the group slowly returned to the zodiacs and the ship, but we stayed till the last and were frozen, even with thick and proper layered outdoor gear.

Marius had a moment of genius when he noticed penguins waling through the brood and panned them at a slow shutter speed. He gracefully shared his idea with his clients. What a great and generous photographer. Have a look at his website here.

Back to the ship and we were all on a high from an intensely beautiful yet rugged morning.

It was to be the birders afternoon as we cruised onto Drygalski Fjord. The bridge is open at all times to passengers but the tension is palpable as the captain and crew negotiate the narrow entry into rocky harbours or fjords. I am sure they must use some vodka to distress afterwards.

The birders were there to see the last remaining South Georgia Pipits, the most southerly passerine in the world and endemic to South Georgia. There was a rat free island here where the bird could breed and the eggs were not destroyed. The birder’s disappointment was audible when the ship had to swing around in the fjord and exit because of a snowstorm.

The next two days saw us crossing the Scotia Sea. I survived the trip in terms of motion with three drugs now: Epanutin, Stugeron and Scopolamine. Then I was struck down by ‘flu, and took to my bunk for another two days of hallucination.

But when I surfaced we had crossed 60 degrees south and we were in the thick of ice.

The ship maintained a blackout with no outside lights except essential navigation lights and all cabins had to have the blackout curtains drawn. We were doing this to avoid petrel mortality as they flew into the light like moths.

I awoke a new man. No sickness. I was so happy to be alive!

I was up before breakfast and went upstairs to the lounge and to the deck to suck in the sweet cold dry air and be faced with glaciers a few hundred meters away on either side of the ship. After being laid low I had forgotten all this port and starboard stuff.

I was looking at South Georgia, a long island running north south with a western seaboard that was hammered by Antarctic weather systems, and the eastern seaboard that had numerous bays that had been carved out by glaciers that still reached the sea, although in some places they were receding. The sea was ice blue, the sky clear with some wind. It was 1 Degree Celsius. Penguins were porpoising along side the ship and seals played like puppies around us in the water. 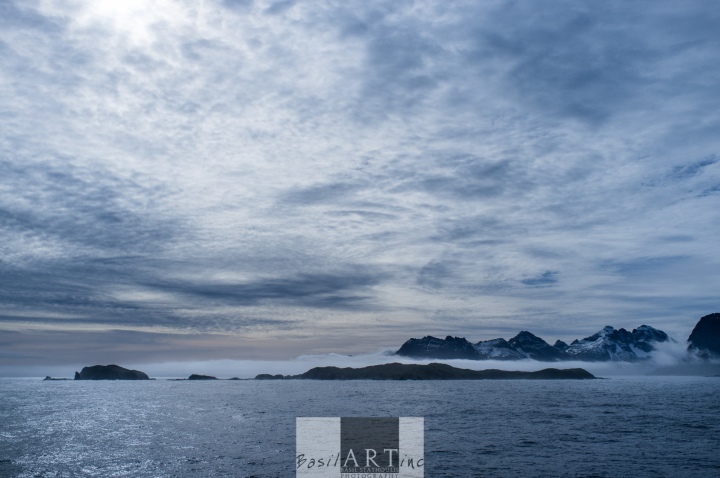 I sat at the bar and had one of Amanda Jurinen’s famous Smoothies. It paid to get there early. Amanda always had a smile on and with her soft voice a 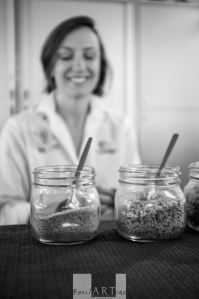 warm greeting and a story to tell. She was a wonderful hostess.

After a light breakfast we readied ourselves for an excursion to Salisbury Plain, which is found with the Bay of Isles.  The expedition team tried to land but decided it was too rough with big surf breaking on the black gravel beaches. We ended up riding the Zodiacs behind the backline, which was only 20 meters or so from the beach, so we would get good close ups of the view.

What a view it was: silver-white waves rolling onto the beach that was home to a breeding colony of King Penguins of more than 300 000 birds. Fur seals too numerous to mention. The colony stretched up from the beach, which was the widest point up into a low valley in the Alpine setting between the Grace and Lucas Glaciers. Yes, the mountains of South Georgia rise above the glaciers like the Alps rise above the plains of Italy and Germany. Except here he plains are the sea.

In the Zodiacs we could almost touch the penguins and seals. They launched themselves into the surf and played, some penguins swimming backstroke while others dived. They played in groups and broke away to hunt. On the beach the masses thronged and it was truly one of the amazing wildlife spectacles of this fragile earth of ours.

So Lucky in Fortuna Bay

We boarded the Vavilov and made our way further down the island to Fortuna Bay. This was much more protected than Salisbury Plains and we landed easily and in the midst of penguins and baby seals, or wieners. There was a King Penguin breeding colony at the base of a glacier about 1 kilometer inland, but I was so engrossed with the wieners and the young penguins in their brown down that I hardly moved from where we landed.

There were clear streams of water flowing in the green grass, while the waterfalls not a few hundred meters away that fell into the wetland were frozen. The peaks were high and covered in snow, the valleys lined with glaciers.

As we stood to take pictures and compose penguins and wieners would come up behind you, and when you turn around the wieners would bark and feign attack, just like a playful puppy.

Both Salisbury plain and Fortuna bay were stellar introductions to the spectacular wildlife of South Georgia.