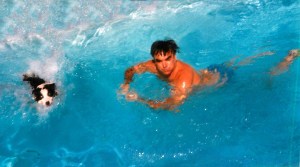 My father always started his day early, but on Sundays he slept in and read all three Sunday papers: The Sunday Times, The Sunday Tribune and Die Rapport.

Other days he would get up to exercise. First he would wake my mother with tea, then work out on the treadmill or bicycle in the spare room. If the weather was good, and after the dogs arrived, he would take them for a walk. In Greece he would do the same, if it was not too cold, or not raining in winter, he would go for a walk. In summer he would swim. Skye would always beat him to the pool.

In the seventies, after the first major world economic crisis since the Great Depression, he would leave at 4 a.m. in his blue two door Fiat 128 1100 for Witbank, and come back via Pretoria to check on building
projects. He would get home late at night, I cannot remember, probably 9 p.m. or later. Those were tough years. The years he told me about afterwards, when I asked if they were really that bad.

“Yes, you don’t realize that mom and I starved so that you kids could eat and grow.”

“You should have told us” I said. My father had a dichotomous philosophy. At Sunday lunch he was a negative scenario specialist, but that is why he survived and was successful. After Sunday lunch he was positive and generous. We never lacked for anything. We were sent to university, some to complete studies diligently like my brother and others to wander through engineering first and then embrace medicine like me. We had whatever it took to complete our studies. Cars, books, field trips, holidays (Greece not negotiable, but later with a trip to Austria, Switzerland or Germany thrown in as a treat) were all given no questions asked. But we could not ask for a fancy car and of our own volition did not do the clubs and discotheques.

So we were protected in life, and both my brother and I became early risers for university. Then training as a specialist necessitated early morning rounds and one of my bosses used to start at 6a.m. with X-ray review. For years after that I left for work early, avoiding the rush. The quiet in the office allowed me to plan my day and work on projects and management issues.

Then I started exercising earnestly and went to gym at 5 a.m. for two years. A while after that I burnt out, and discovered the joy of starting my day at 5 a.m. for myself, not for work. I spend time with myself and settle down to write. If there is time left over I work on my pictures. Some mornings after breakfast I go down to the beach and settle into the morning with the rhythm of the waves.

So I do recommend early morning rising. It is the best time of day, quiet and full of promise. More important, though, is to take that precious time and make it your own.