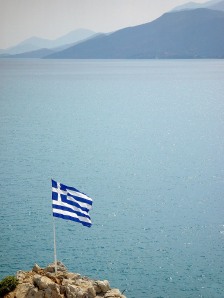 I know today is a holiday in Greece. The day we said OXI (no) to the invasion by the Italians. Yesterday we said yes to the European banks writing off 50% of their Greek debt. I doubt OXI will change to EFXARISTO (thanks).

My father spent many OXI days making speeches at schools and churches and communities. In 1974 he made a patriotic speech at the new church. Yes, church and state were indivisible. It is filled with rhetoric and slogans. I have translated from the Greek:

The great OXI was shouted out loud in October 1940, across the Mediterranean Sea and Balkan Mountains, hearkening back to the Ottoman Occupations and the freedom once known by the expansion of Macedon into Asia by Alexander the Great.

The next speech I have on record is 3 years later. On 28 October 1977 my father made a speech at Marais Viljoen Technical High School. This was a dual medium high school, with beautiful grounds at the foot of the koppies in Alberton. It had a strong academic and sporting tradition. They were my high school’s arch enemies in athletics. I remember running a 200m race and being cut off by their star sprinter in the corner as I overtook him on the inside. I lost that race, but we won the 4 x 100 m relay.

He was invited to speak at the conservative school on  ”What Hellenism has Contributed to South Africa” . It must be one of the few speeches he made on 28 October that did not contain any slogans and win which not a word of Greek was spoken. In fact, in that speech he does not mention the relevance of the day to Greeks.

He expounds on the history of Greeks arriving in South Africa:

The he moved on to explain the two types of immigrants who arrived: the unskilled initially and then the skilled. All of who had the entrepreneurial spirit. He expounds on great Greek sportsman, but refrains from mentioning that the Greeks started the Olympic games.

Along the way in trying to explain the dual nature of the South African Greeks he emphasises that “ we do not worship two gods”. I am not sure why he said that.

He concludes the four  page speech typed on a typewriter and edited with Tipex with a summary of the commercial success of South Africa Greeks. A classic is the Potato King, Lampies Nichas, whose spud empire threateden the USA.  They supported farmers to outstrip his production so that he would lose his dominance in the industry.