While we always joked with my father and Uncle Arthur that the highlight of their trip was a stay in Las Vegas and a chance to play in the grand casinos, their once of a lifetime trip to the United States was important.

They went over in the seventies, flying in a Boeing 707. The landed in New York and visited Staten Island and the Statue of Liberty. From there they flew to Los Angeles to visit and stay with their cousin John, a Stathoulis family on the other side of the world when the world was still a big place. 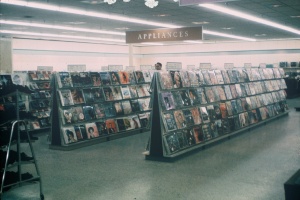 I found my father’s pictures from that trip after he died. What impressed me was the way he captured the grand size of everything in the States, at a time when South Africa was

only starting to build malls. He has spacious pictures of casinos, yes, and of department stores with unlimited stock.

I know my father came back motivated from that trip to put into action the great American dream. He was never entranced by it like his cousin Peter Manelis, who collected American cars and raced in America. But the dream came with a price, and my father saw it: the destruction of the family.

I remember going to Los Angeles in 1987. I was doing my elective work in Greece and flew over to Woodstock and then Los Angeles. I did not visit Staten Island and drove straight up through the first snowfall of winter into Woodstock. I stayed a night and two days at the famous concert village and then flew to Los Angeles. I visited my father’s cousin John. Torrance, the suburb where they stay, is on the southern side of Los Angeles. There were great lever arms of oil pumps on some corners, silently slaving away to drive America.

Their house was not big by American standards, but then again I found the houses deceptive in America because I only saw the front. It may have stretched far into the back. I do not remember what we spoke about. We did not speak in Greek.

I do not remember what I wanted out of the meeting. I do remember I did not stay with them, but rather with some village compatriots in Burbank, beyond the Hollywood Hills. I remember driving around L.A. in George’s white Jaguar saloon and sitting in an Italian restaurant on Rodeo Drive living the high life and discussing philosophy and love. I do not remember any of the details, but I do remember meeting a cool artistic guy who joined us for dinner one night.

I think I flew back to Greece after that and stayed at Panayiotis. I spent one night in a villa on the sea at Agia Marina talking politics and love with Corinne, and left with a copy of Fitzgerald’s “Tender is the Night”.

I remember my father landing at Jan Smuts’s airport after his trip to the States. He was not tanned brown and energised like when he came from Greece. He was pale and tired, jet lagged, from seeing the other side of the world.