He was less scathing when I went into private practice and worked through some drafts of business cards with him. I gathered that a business card should have your name, address, business details and qualifications on it. While I chose the blue writing to represent the big African sky, for him and all Greeks, it represented the flag of their Patrida – homeland. He was even more impressed when I appended the word ORΘOPAIDIKO below my profession, listed as an Orthopaedic Surgeon. After all, it does come from the Greek. I had a funny call from an old G.P. in Durban who had received a copy of my letter to a colleague when one of his patients came for a second opinion. I thought the G.P. was calling to find out about my incisive opinion; in fact, he threatened to report me to council because I had illegal items on my letterhead. The Medical Council rules only allowed name, address, contact numbers and description of specialty. No pictures or any other proclamations. I tried to explain to him that ORΘOPAIDIKO  only translated to what I did in Greek.  He was Colonial and did not understand. There were two offshoots from that telephonic discussion: firstly I dismissed the old doctor as uneducated; and secondly, I removed my profession from future business cards, in Greek and English, and looked for a new profession. My anger reflected the anger my forebears felt when they were called “blerrie Greeks” or even “WOPS” mistakenly.

My father liked to think of himself as creative, as do I. His first foray into branding was when he did the sign for his construction company ACC. This was an acronym for Alberton Construction Company. The letters were in a Roman Font lying vertically in the outline of a blue Corinthian column. I remember the billboards outside new developments, and the first time we saw the new logo on a Sunday drive. He must have been very proud.

His second significant foray was when he needed a card that made a statement about himself. His wings had spread, and he had achieved more and needed to encompass the various facets of his life, which did not just include construction. That it had to be in blue was an easy decision. He was Greek. Who he really was had to be encapsulated in a logo. For this he turned to the wife of a friend of his son-in-law. Gina was an lively artist, and he commissioned her to do a pencil sketch of his father’s house in the village. They went through various designs until he chose the one that appears on his card. 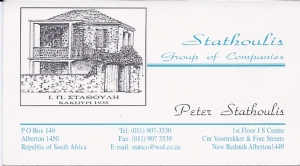