Ever since I can remember my mother would put a real pine tree in the corner of the lounge and decorate it for Christmas. My father would never allow a plastic one, and I feel guilty very year when I haul out my small yuppie 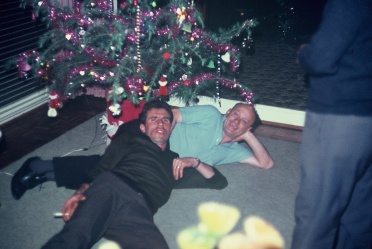 Uncle Piet and Zaccharia at our Christmas Tree in the seventies

plastic tree and light it up near the window of our dining room. At home, the lounge would slowly be imbued with a foreign fresh pine scent that must have reminded my father of the plantations in the Berg or the forests on the slopes of Mainalon in Arcadia.

After Christmas the tree would be planted in the garden. There was an aquifer running below our hose and we had a strong borehole; when any tree tapped into the sandstone water reserve it shot up. Once during a storm my brother and I smelt that same foreign fresh pine scent and we found one of our giant Christmas tree tops speared through the roof and ceiling of my parent’s room. After that, and at an age when we realised that pine trees were exotic and used up our water, we stopped planting them.

In the front garden we had a cypress tree, which in the eighties was big enough to hold a string of large coloured outdoor party lights. My father would religiously switch them on at night, and pressure the gardener to replace any broken ones. There were often grand hailstorms on the Highveld in December that decimated the show of lights.

I remember driving though the streets of Benoni and Johannesburg to look at the Christmas lights hung between lampposts. Those lights did not seem commercially based; they were just beautiful for the sake of Christmas.

The funny thing is that when my father spent his December at 45 Kakouri in the village in Greece, he had a plastic tree. There a tree cut from the forest slopes of Mainalon would have made a mess and he used to help clean the house in those days.  So it made sense to forego the fresh scent of pine that could flavour retsina, and rather just drink the retsina and admire the plastic tree with colourful lights. His coup was decorating the veranda with Christmas lights and waiting for the village children to come singing the kalanda – carols. He used to drive us crazy when he came home loaded with tapes then CD’s of the Greek Christmas carols. He would play them nonstop and we would cringe. But in the village, especially if it was snowing, it was beautiful.

My favourite carol is in fact the New Year song Άγιος Βασίλης έρχεται – St. Basil is coming. It is a particularly beautiful piece of Baroque music that when played by a master on the piano without vocals is haunting and reminds my inner soul of the real reason we celebrate Christmas. We light up our lives during the darkest night of the winter solstice to celebrate life.

One thought on “Conversations about Christmas Lights”