I found a letter in the pile of personal documents my mother gave me. It was posted on 24 February 1958 from Warmbaths, then part of the Transvaal. The single small stamp looks like the precursor of a portrait of the stylised zebra that Investec has as its emblem. The envelope is addressed simply to:

It arrived the year before my parents were married. They had their honeymoon in Warmbaths, and Mr Stander, the writer of the letter, lived there. He had helped my grandmother with my father when he was small. She would have been in South Africa only a few years when Mr Stander helped. I cannot imagine how they met, or what he did to help. Or even how they communicated, because she could speak no Afrikaans or English in the early days of her immigration.

His letter is addressed to my father, family and dearest friends. It is written in old Afrikaans, with more than a hint at Dutch. Mr Stander complains of the heat in Warmbaths. February would have been the end of summer. He developed pneumonia and was bed bound for eleven days. After the diagnosis his one leg went lame and he was worried that he had contracted polio. There had been four cases diagnosed in the Warmbaths community over recent months, and with respect I assume these were amongst the whites only. Using heat treatment and rest to retard the damage done to the spinal cord by the polio virus was in vogue at the time. This much is evident from the medical literature at the time. Who knows, with all these people seeking treatment in the warm waters they probably caused infection of others. Mr Stander was happy when the doctor told him that it was not polio, and that he must get out of bed and walk. He did, slowly, and walked with a “kierie”. He complains that he had to do everything himself, that there was even no maid to help him. With the heat and his illness his garden had dried up and the weeds had taken over.

It is an odd letter. I suppose an sms would impart that information from an old friend today. “Hot in Warmbaths. Recovering from pneumonia and thought I had polio. Dr says not. Garden a mess. Regards to the family. HC Stander.” In sixty years time no one would have any record of the event. Instead I have neatly folded letter posted with care and carrying news of illness to friends who cared. It does not ask for anything, other than Godspeed to meet again.  The addressing of the envelope is also heart warming. No street or number, no code, and yet it arrived. In those days Union Café was a landmark in Alberton, with my grandfather and Uncle Piet delivering some semblance of social service to the poor whites of the area. The same poor whites that the government introduced affirmative action for in the form of Apartheid.

The tragedy today is that the poor people today  cannot write letters and only use sms’s to communicate. They also do not have a Union Café to look after them. 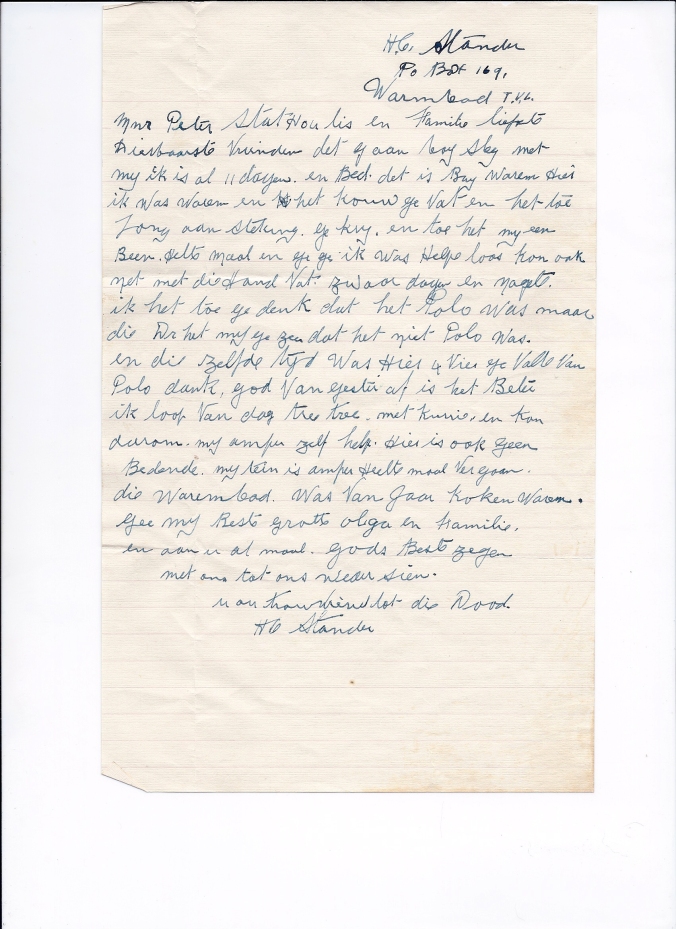 The letter from Mr Stander

One thought on “Conversations with Mr Stander”